Since 2003, each year dozens of supporters and alumni runners of TeamAIDAsha, volunteers from AID and Asha Boston/MIT chapters come together to organize this fundraising program. Despite their busy professional and personal lives they find time to help the runners and the program succeed each year. Just a couple of hours a month can make a big difference for our runners and the underprivileged kids and families who benefit from this program. We hope you join our team as a runner or as a volunteer soon. You can signup anytime as a runner here or as a volunteer here. Here is a list of some of our volunteers for this season. A lot more volunteers help us behind the scenes, they are too busy to upload their profiles on this page :-) 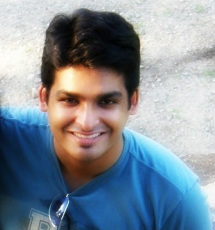 I have been involved with the Team AIDAsha program since 2009 when I ran the bay state half marathon and I have been hooked ever since. I ran the DC marathon with TAA in 2010 and am a part of the TAA coords team. Our pre-season activities primarily focus on gearing up the publicity drive for the program and organize the info sessions. During the running season, apart from constantly pestering new runners to run the full marathon and scavenging for new volunteers, I primarily coordinate the water support logistics for the program and double up as a mentor. When I am not doing TAA stuff, I survive through as a scientist in the biotech industry. 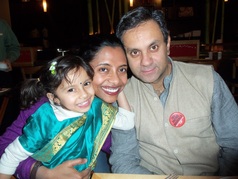 Mona & Somnath have been doing water support for TeamAIDAsha since 2006. Adrita starting helping out after she was born in Aug 2007! We are AID volunteers who coordinate several projects and campaigns within AID. When we are in India, we spend considerable time at places where AID supports projects in Agriculture, Health, Education, Livelihoods and many more. The money raised by the runners goes directly to support the work in grassroots India. When people in the villages ask us how we raise money for the work in their village, we tell them about our runners:) We are greatly inspired by the runners who put in so much effort to support the grassroots work. 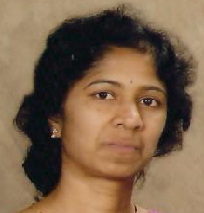 I am a software engineer by training & profession, passionate about children's causes be it education or adoption. After being introduced to Asha for Education by a coworker-friend some 12-years back, try to contribute whenever I can after tending to my 2 kids :-). I love to travel with family & friends 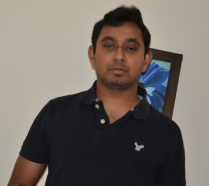 Hello folks, I joined TAA as a runner in 2010 and learnt about the good work done by the organization. Enjoyed the experience, came across good friends, understood the work involved, so helped out with the advertising and water support in 2011. It has been a good journey, meeting new friends and knowing that the funds raised are being used for a good cause. I would continue with the team as a runner or a volunteer. For new aspirants, its a good opportunity to stay healthy, meet people and have the immense satisfaction of helping others 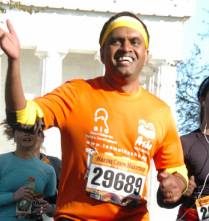 I did my first marathon fundraiser when Parthiv Shah (Asha Boston) started this program in 2003 while I was an AID volunteer. Our coach Jonathan guided 8 of us train and finish our first marathon. It was an amazing feet considering that all of us, except Parthiv, were newbie runners and we had no idea what we were getting into. I have been volunteering for the program since then and have completed 2 more marathons (hope to do some more in future). Apart from the satisfaction of helping a great cause, I thoroughly enjoy working with our team of dedicated volunteers from TAA, AID, Asha and runners each year. Together we keep pushing the limits of what we can do as individuals and as a team. TAA has become one of my favorite activities during summer Saturdays. It is a nice way to relax and recharge for a busy life as an entrepreneur during rest of the week.

Joyoni is a 1) mother of a three year old  and 2) an Assistant Prof of Radiology at UMass Medical School who writes grants and algorithms for a living. She is inspired by the cause that AID represents and the immense dedication AIDers in Boston and across the world show to help the under-priviledged in their beloved country.
She ran a marathon in 2005 to raise funds for AID. And has been a active water-supporter for marathon runners (AID-Boston) ever since.

Kunaal loves to join his mother for the water-support -- he likes the trails, the runners saying hi and sometimes (if at an end-point) taking him to see ducks or talking and laughing with him after their exhausting run. And of course he likes to hand-out the blue/green/pink/purple (gatorade)-water (and always drinks a bit of each colored water himself). 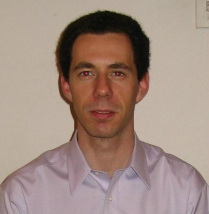 I am a computational biologist working in the Boston area. I discovered TAA in 2007 after a fellow graduate student from MIT told me she was running a half-marathon in 2 weeks. Instead of contributing to her fundraising, I decided to support her by running it as well. Though I could barely walk for the two days after the half-marathon (thereby realizing the importance of a longer training period), I really enjoyed the team's camaraderie and decided to join it and run the full marathon (with proper training) the following year. Since then, I have been helping the team with logistics and conducting the fundraising clinic. I am back as an alum runner this year, and hope to qualify for the Boston marathon, or at least beat my 2008 time. I look forward to forming new friendships with fellow TAA runners through our shared passion for running and social justice. 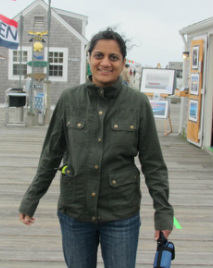 Year 2003: A casual conversation with Biju Kalissery revealed that he was training for a marathon. Really? How much does one run as part of a marathon? 26.2 miles? Really? Was Biju a regular runner/marathoner in the years past? No! Really? How can one just get up and decide to run a marathon? Even before one could think these questions and answers through, Biju had actually completed a marathon and successfully continued to exist - alive, breathing, walking! Wow, I thought, this is amazing that someone just like us, ordinary folk, ran and finished a marathon (of course everyone knows that Biju is far from ordinary – this just reveals my immature thinking due to my relative youth at the time).  And then when Biju proposed at an AID CSH that we start a marathon program, I rashly volunteered myself (and close family) to sign-up and train for and run a marathon. This is how it all started and several years later I’m happily maintaining the connection with the TeamAIDAsha program. It has resulted in one full marathon (2004), one half-marathon (2011), mentoring, water support, trying to keep up a decent running frequency (like running short distances 30 to 50 times a year) and even committing to real-estate (and a mortgage) near the minuteman bike-path. This year I hope to show up for water support and the socials, of course, and meet with all the fantastic runners that have taken on this challenge for something greater than just personal good. 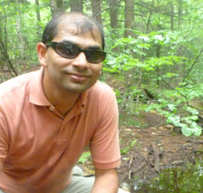 TeamAidAsha (TAA) is a great program which transforms ordinary men into Jedi like star athletes or Alien like super-performers. I have come a long way literally. Not having any prior running experience, I ran 13.1 miles at the Bay State Half-Marathon in 2010 to support TeamAidAsha. For me, this progress is similar to going from biking to zipping a starship (may be USS Enterprise NCC 1701 D). I am elated to be part of TAA as it raises funds to support various social causes in India including education, employment, healthcare and community development. Also, I want to thank fellow runners who keep motivation high and and volunteers who work behind the scenes to make the p running experience more comfortable enjoyable. As a fellow runner and your social coordinator, I look forward to running in support of causes that are close to my heart. May the force be with us! 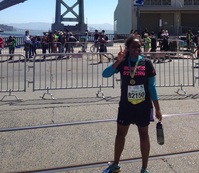 Every year in my life I decide to do something challenging that I have never done before and this year I am running the marathon for TeamAIDAsha. I think it is a fantastic way of doing something for my community. I recently started volunteering for AID-Boston and I hope to be active in many of their such future endeavors. Apart from this I work as a Bioinformatician for a Berg Biosystems in Natick. 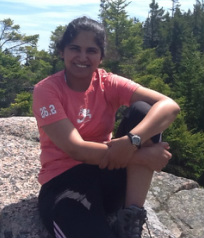 In 2009, I ran my first marathon, it was one of the most memorable summers in my recent memory  thanks to the great friends I made, the very helpful TAA volunteers who organized it all and alum runners who made it look so easy. In 2010, I decided to run the Marine Corps marathon in DC. This time, in addition to being a runner, I decided to also volunteer with the program to make it a positive experience for the other runners. Since then I have actively volunteered with the Program some of which includes helping get the word around to recruit new runners, publicity for the program, providing water to the thirsty runners by helping with water support every week and coordinating with other chapters for registration, and other administrative tasks. I am glad that i have been able to take time out from my job as a Mortgage loan originator and help people achieve some personal milestones while being associated with a much greater and noble cause.
Hope to see you at the run this Saturday! Also don't forget to stretch!!! 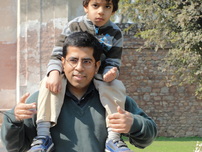 Back in April 2004, which feels like a lifetime ago I was made to realize that I'd been signed up to run a marathon. Considering that my previous running experience consisted entirely of running after BEST buses in Mumbai, this was a somewhat surprising occurrence. What was a mild surprise in the beginning turned to rude shock after my first training run. I somehow managed to finish the 3 mile loop around the Charles River promising myself that this was the last time I ever tried something this foolish.  Evidently I had overestimated my ability to say no.
Had I somehow summoned enough will power back then to refuse the invitation to torture myself the following week, I may have had time to discover other healthy pre-occupations for Saturdays during that summer - like watching TV, visit drinking establishments, and other such pleasant endeavors.  As it turned out, I somehow creaked through the training and huffed and puffed through the Marine Corps marathon. And I have now managed to convince myself to discover every nook and cranny along a 3 mile route on the bike path close to home. When persuaded to be out of bed early on Saturdays, I do find myself also providing water and electrolyte support occasionally. It has been fun supporting TAA, and I hope many more commit the folly I once made. Happy Trails! 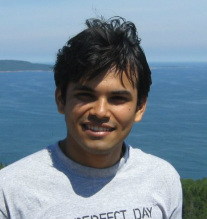 I am a software engineer by profession, live in Arlington and am an avid runner. I used to run on my own and decided to run a marathon. I got to know about TAA via my friend. I ran my first marathon with TAA in 2010 and has been TAA volunteer since then. You can ask me any questions about running in general, routes, water stops, fund raising, marathon experience, and etc. If not directly, TAA gives an opportunity to return back to community in some way. 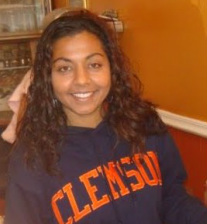 I learned about TeamAIDAsha through Association for India's Development. I ran the Chicago Marathon for the first time with TAA in 2008. Since then I have been volunteering for TAA. In the past I have served as the social coordinator for the team. As the social coordinator, I organized socials that gave runners an opportunity to meet fellow runners as well as alumni runners in order to enhance their marathon training experience. This year I am volunteering with the central coordination team in various roles including serving as the liaison between TAA and AID. My experiences with TAA have been full of learning, growing, and lots of strong team work!